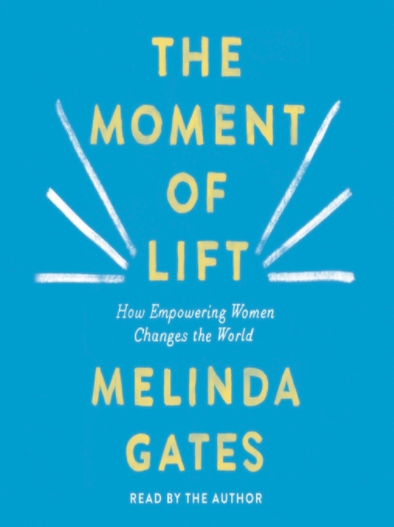 Philanthropist, business-woman and co-chair of the Bill & Melinda Gates Foundation, Melinda Gates explores the benefits to society when women and children are given the support that they need to thrive.

The book begins with Gates sharing a childhood memory of attending space launches in her hometown of Dallas Texas in support of her father’s work on the Apollo program as an aerospace engineer. She remembers the drama and excitement of liftoff, which she found exhilarating, “Those moments always gave me a thrill – especially that moment of lift when the engines ignite, the earth shakes and the rocket starts to rise.” She then connects this memory to the phrase “moment of lift” which was used in a book by spiritual writer Mark Nepo, referring to a “moment of grace.” This prompted a curiosity in Gates to want to know more about how “lift happens.” She said “How can we summon a moment of lift for human beings – and especially for women? Because when you lift up women, you lift up humanity. And how can we create a moment of lift in human beings’ hearts so that we all want to lift up women? Because sometimes all that’s needed  to lift women up is to stop pulling them down.”

From there, Gates shares emotional experiences traveling the world as part of the foundation’s humanitarian work, telling heartbreaking tales of tragedy and experiences of every-day heroes around the world. She explores topics ranging from child marriage to gender inequity in the workplace, including an entire chapter devoted to maternal and newborn health.

Gates’ chapter on “Empowering Women” connects global poverty to female empowerment with the idea that poverty limits a mother’s ability to protect her children, referring to poverty as the “most disempowering force on earth.” Gates found that the mothers and children dying in the poorest parts of the world would likely not have died had they lived in an affluent community. When a community has barriers in place that prevent women from the care that they need to keep themselves and their children healthy it creates a situation where, as Gates says “Women are outsiders.” She explains “When any community pushes any group out, especially its women, it’s creating a crisis that can only be reversed by bringing the outsiders back in. This is the core remedy for poverty and almost any social ill – including the excluded, going to the margins of society and bringing everybody back in.”

A Moment Of Lift plugs us into the global experience of motherhood. Whether you are a mother, a woman or a human, you’ll connect to Gates’ stories in a deep and profound way. While we may not find ourselves caring for mothers and children in a remote village in Africa or India, it is easy to look around our own communities and understand how giving mothers and children their own “lift” can help our world thrive.

On the local level, we work to support women and nurture babies in our community, join us as a volunteer to new moms on our text-based platform.

Have you read The Moment of Lift? Share your thoughts in the comments below.